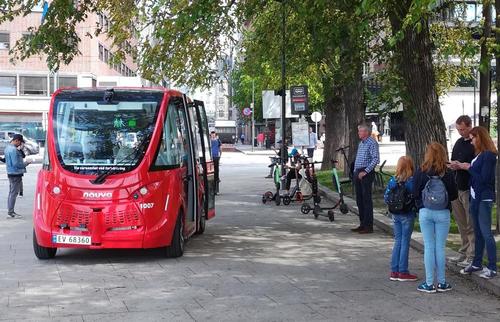 Ruter's autonomous buses successfully handled interaction with traffic lights and other road users, but there are still challenges that must be solved before autonomous buses can be an effective actor in city traffic.

The Institute of Transport Economics TØI is involved in several research projects where self-driving vehicles and buses are tested. Most pilot projects take place in limited and controlled areas or in areas with simple traffic conditions, such as on Akershusstranda in Oslo.

In a recent TØI report researchers have tested self-driving buses in more complex traffic environments, including meetings with a large number of cyclists and several light-regulated intersections.

The study has examined the buses` behavior and reactions to other road users and to the traffic signals, and how other actors in traffic behave in encounters with the bus. Cameras were installed in three signal-controlled junctions. The video analyzes made it possible to identify unusual situations and potential risks.

The analysis shows that the buses reacted correctly in most interactions. The buses recognized violations of the traffic rules caused by other road users and responded adequately, even in complex situations. No serious conflicts were observed.

However, situations where the bus reacted incorrectly occurred. Especially unjustified stops at the intersection when there was no obvious reason for stopping. Thes situations can increase the risk for other road users.

The buses' defensive driving style also affected the behavior of other road users, bicyclists for instance, who in some cases made risky maneuvers to place themselves in front of the bus.

Light signal changes near the stop line, especially from green to red, often provoked the bus to make react incorrectly. Additionally, if an unexpected situation arose at the same time, for example that a cyclist cycled in the opposite direction, the bus chose incorrect response wrong reaction even more.

A total of 408 bus passages were filmed, and in 170 concrete situations the bus had some form of interaction with other road users.

The findings provide valuable knowledge about how today's self-driving buses react to traffic signals and other road users at junctions with traffic lights, and is important in the work towards further automation of vehicles.

Other research projects on self-driving vehicles in which TØI is involved are the EU projects LEVITATE and Drive2theFuture, and Norwegian MOVEMENT and AUTOBUS.

You can read the full report here.