The prevalence of drink-driving among drivers of heavy vehicles is low in Norway. 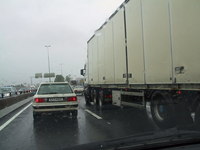 An estimated 0.005 – 0.25 per cent of all driving of heavy vehicles in Norway is carried out by drivers having a blood alcohol concentration (BAC) above the legal limit of 0.02 per cent. The conclutsion is based upon breath tests of 2836 heavy-vehicle drivers checked by the Mobile Police. One of these drivers had a BAC above 0.02 per cent.

Also among heavy vehicle drivers involved in fatal accidents the prevalence of drink-driving is low, between 0.0 and 1.21 per cent. The estimate is based on data from 232 fatal accidents involving a total of 247 heavy vehicles from 2005 through 2008, described by the Accident Analysis Groups of the National Public Roads Administration.