Centralization of production and wholesalers leads to more transport. 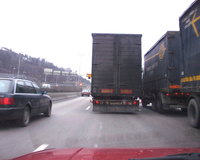 The companies’ individual choice of logistic solution has a great impact on the transport volume generated. More than half of the last 15 years’ growth in domestic freight transport volumes (in ton kms) by road can be linked back to increased transport of mixed cargo and food.

This period saw a specialization and centralization of the production in the food industry, a centralization of wholesalers in general, and a growth in the use of chain distribution. The relative importance of transport in the value chain grew.

Increased imports of consumption goods have led to a growth in the domestic freight transport. Most goods for private consumption in Norway are imported, arriving at wholesalers in the Oslo region for cross docking and consolidation before being domestically distributed.

The report is part of the research project Logistics in Norway, financed by the SMARTRANS program in the Norwegian Research Council and the Norwegian Road Authority.