Emission measurements conducted by TØI in in collaboration with VTT in Finland show that new Euro 6 cars with diesel engines are struggling with too high NOx emissions in real traffic. After Volkswagen has admitted cheating in emission tests in the United States by making its cars appear more environmentally friendly than they are, our study is no less relevant for a European context.

From 2015 EURO 6 emission standards where introduced for cars and similar EURO VI requirements for heavy vehicles. These requirements are including NOx and particulate matter from new cars.

Since 2011, TØI and VTT have conducted emission measurements of 12 heavy vehicles with Euro VI engines, and seven Euro 6 diesel cars. In addition, several petrol vehicles (Euro 5 and 6) and diesel vehicles (Euro 5) are measured. All vehicles were tested in laboratory under conditions that as far as possible should correspond to the actual use of the vehicles.

Our measurements show that Euro 6 type approved private cars with diesel engines have 4-20 times higher emission of NOx in city traffic and during cold weather than the type approval limit value (0,08 g/km). The average emission of NOx from the tested Euro 6 private cars with diesel engines was also about four times higher than the average emission from the tested city buses and heavy vehicles with Euro VI engines.

In real traffic, Euro 5 diesel cars and the seven tested Euro 6 passenger cars with diesel engines generally have low emissions of PM. The limit value for Euro 6 approval is significantly higher than what we measure from new Euro 6- approved diesel vehicles under all driving conditions. New diesel cars have, in other words efficient and well-functioning particle filters.

Modern heavy vehicles including city buses with Euro VI engines have low emissions of nitrogen oxides (NOx) and exhaust particles (PM) for all types of test cycles. The reductions are more than 90% compared to the emissions from previous Euro V generations. 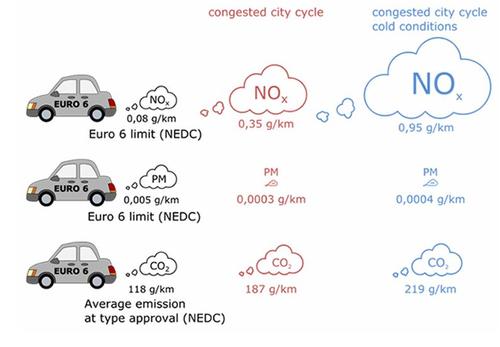 Figure 1: Comparison between limit values from EUs type approval regulations (black clouds) to emissions in “real life” city traffic from the average Euro 6 diesel passenger car. NOx, PM and CO2 emission when using the Helsinki city cycle. Measured at +23 °C (red clouds) and -7 °C (blue clouds). The size of the red and blue clouds indicate the difference in emission from the emission in the type approval test (NEDC).

The study was funded by the Norwegian Public Roads Administration, as part of the "EMIROAD" program.

Please read more about our studies in these reports (summary in English):