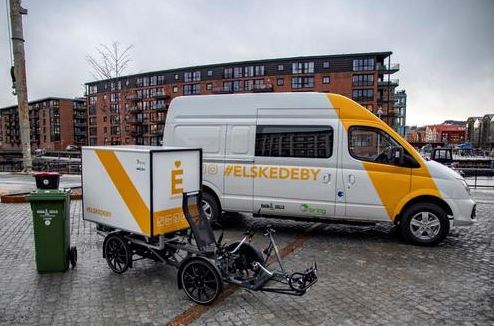 No conflicts or accidents during the test period occurred, but the efficiency of the logistics was not as good as expected beforehand.

These are the main findings in a new TØI report where researchers have evaluated the pilot project Elskedeby. Elskedeby is a collaboration between the Norwegian Postal Service, Ragn-Sells and KLP Eiendom, where diesel cars were replaced with smaller electric vehicles in city distribution in downtown Oslo.

The result shows a reduction in greenhouse gas emissions of 94 percent. In spite of having many encounters with pedestrians in the streets no electric vehicles were involved in conflicts or accidents. This indicates that the Paxster and Lindetrucker vehicles are safe and play well with soft road users.

However, Elskedeby did not achieve the logistics efficiency that the Norwegian Postal Service and Ragn-Sells had expected. However, more joint customers, better integration of smaller vehicles in the logistics system and increased freight volumes can improve the situation. The Covid-19 pandemic might be a contributing factor to the fact that Elskedeby's logistics efficiency was not as good as expected. Ragn-Sells, in particular, was affected by the pandemic and experienced a large decline in the number of orders, lower volumes and more sporadic orders all over.

TØI's calculations reveals that there is a great potential for decreasing the number of vehicles operating in the pilot area in Torggata by establishing a Hub for goods delivered to the area. In one scenario, the number of vehicles could have been reduced by 80 per cent and the operating area occupied by the vehicles reduced by 45 per cent, given certain conditions. Giving vehicles operating from a Hub exclusive access to the streets on specific times of the day, combined with stricter enforcement of access- and speed restrictions, could help increase the chances for establishing such a Hub. Which in turn would have positive effects on the urban environment.

Major changes in urban distribution, development of greener vehicles and the establishment of Hubs might call for the municipalities to have autonomy to regulate land use and measures to develop efficient and sustainable urban logistics.

The report is meant to provide a knowledge base for how to regulate the addition of electric freight vehicles to the city logistics.

Read a summary of the report here