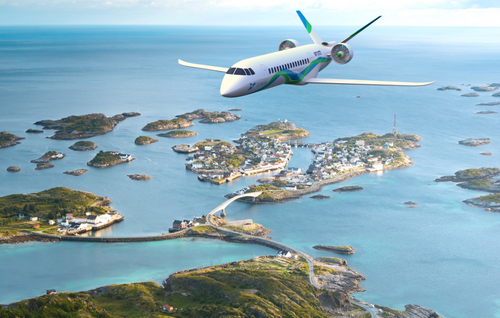 Investing in pilot case with electric planes on the Stavanger-Bergen route in the 2020s can accelerate electric aircraft in Norwegian aviation.

The pilot can thus have a greater net societal benefit than not investing in electric aviation.

This is the main conclusion in a new report from the Department of Transport Economics TØI. The report was prepared on behalf of Start Norge AS, which has set the goal of establishing the world's first commercial electric aircraft route between Stavanger and Bergen in 2026.

The conclusion presumes that the ambitious climate goals Norway has set will be implemented and that air traffic will continue as it is today.

Other incentives that can prove effective are exempting the air passenger tax over a longer period and thus use the air passenger tax to finance an aviation climate fund. Furthermore, the emission requirements set by the aviation authorities for the FOT routes can be stricter in order to increase the pace of developing and implementing new technologies.

The Stavanger-Bergen route is ideal for å pilot project

The flight distance between Stavanger and Bergen is only 160 kilometers and thus well suited for a demonstration case, as the first-generation battery-electric aircraft is likely to have a range of approx. 350–400 km. The customer base is also relatively large, at about 550,000 passengers annually, and alternative modes of transport take longer time.

The suggested pilot project can lead to a faster phasing in of electric aircraft in other parts of the country as well, and by setting such an example the use of electric planes can also accelerate more quickly in other countries. This can place  Norway as a pioneering country for electrification of aviation, much like the Norwegians have in the case for electrification of transport, such as cars, ferries and bicycles.

The effect of the pilot is difficult to calculate. The report is based on Avinor and Luftfartstilsynets goals that the first ordinary domestic scheduled flights will be electrified by 2030. And by 2040, all civil domestic aviation in Norway will be electrified, something that will reduce emissions by at least 80 percent, compared to 2020. If successful electric aviation demonstration cases are not completed in the 2020s, a large-scale phasing-in of electric aircraft from 2030 onwards seems less likely, as will achieving the set ambitious emission targets by 2040, the report states.

On the other hand, a pilot case between Stavanger and Bergen can accelerate the pace of phasing in electric planes in Norwegian aviation by five years, which can limit emissions of approximately 6 million tonnes of CO2 equivalents over a 30-year period.

The passengers are positive to flying electric planes

The project has asked 1,000 transport users that travel on the Stavanger-Bergen route their opinion on flying on electric planes and over 70 percent are positive. An increase in flight time of 10 minutes had little effect, and those under 30 were more positive than those over 50.

In the survey a few are willing to pay a small increase in the ticket price for electric airfare compared to conventional airfare, but the majority were not as generous.

The minority of respondents, who are either negative or insecure, seems difficult to turn. Even though the ticket price was reduced by 90 percent, less than half would choose the electric aircraft alternative.

A small proportion of the respondents expressed some concern about range problems, also on short distances. On the other hand, two thirds fully trusted the authorities' safety certifications.

The report was commissioned by Start Norge AS c/o Aircontact Group AS. For more information about the electric aircraft ambitions of Start Norway and their partners, see elflyportalen.no

You can read a report summary here.