This report presents the results of a study of the ways planners and decision-makers in Oslo Metropolitan Area have understood, interpreted, formulated policies and finally acted in relation to transport and land use in a sustainability context during the period since the 1990s. 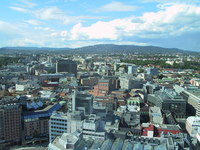 Oslo has broken a long-lasting trend of spatial expansion and has since the mid 1980s followed a clear urban containment policy. Within the continuous urban area of Greater Oslo, the population density increased from 28.7 to 30.7 persons per hectare between 2000 and 2009.

The increase in population density has been going on since the late 1980s. The concentrated urban development in Oslo Metropolitan Area has contributed to reduce growth in car traffic and has clearly contributed to more sustainable mobility than what would have been the case with a more sprawling pattern of development.

A strong focus on coordinated land use and transport planning in order to reduce energy use and emissions from transport is an important part of the explanation of Oslo’s farewell to urban sprawl. In addition, social and cultural conditions necessary for implementing such a strategy have to a high extent been present.

During the whole period since the 1990s, there has been a high degree of professional and political consensus about urban densification as an overall strategy for urban development. Within the Norwegian profession of spatial planners, the compact city has obtained hegemonic status as a model for sustainable urban development. There has also been a considerable market demand for more intensive land use within existing urban areas, especially in the central parts of the region.

Market agents have sometimes also pushed for greenfield development at locations poorly served by public transport in the outer parts of the region, but the amount of such development has been moderate. Although competition for inward investment makes up an incentive for outer-area municipalities to accept such location preferences, national and regional land use instruments have been able to limit the establishment of new car-dependent residential and workplace areas.

In particular, the greenbelt policy for protecting the forest areas surrounding Oslo (the Marka border) and the National Policy Provisions for Coordinated Land Use and Transport Planning have been important. There is still a widespread opinion among planners and policy-makers that the regional coordination of spatial development in the Oslo region should be improved.

The Oslo case is part of a comparative study also including the metropolitan areas of Copenhagen in Denmark and Hangzhou in China.