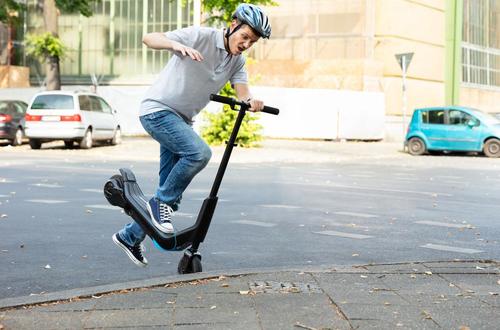 43 percent of e-scooter riders rode with a blood alcohol level above the legal limit and they see it as unlikely to be stopped in police control.

According to a new TØI report over 50 percent of the e-scooters riders "almost never" wear a helmet, in addition to the high number driving under the influence. 1 in 3 has crossed a red light, almost as many have ridden with more than one person on an e-scooter and many have ridden at a higher speed than allowed on the pavement.

The report includes both users and non-users of e-scooters who have participated in an online survey.

Both groups think it is unlikely to be stopped in speed- or alcohol control on a typical trip with e-scooters.

While both private and public shared e-scooters continue to increase in popularity in Norwegian cities little has been done to address the biggest challenges related to interaction and safety. The study shows that there is still a polarization between users and non-users, with non-users generally experience the interaction with e-scooters as annoying and unsafe. Many non-users have experienced near-accidents and point to reckless behavior of the e-scooter riders as an important factor. Users, on the other hand, have most often experienced single accidents and highlight slippery and uneven road surfaces as the most important risk factors.

E-scooter travel is mostly used for business trips and for errands / leisure activities and primarily replaces trips on foot and by public transport. The study also shows that privately owned e-scooters replace more car journeys than trips with shared e-scooters do. A larger proportion of users in this survey say they would have taken a car or taxi if they had not had an e-scooter available on the last trip, than in the previous survey from last year (Fearnley, Berge, & Johnsson, 2020).

With regards to various proposed regulating measures or rule changes related to e-scooters there is a clear tendency for non-users to be more positive to all proposed measures. Users, on the other hand, welcome specific parking spaces for shared e-scooters and increased police control. Furthermore, many users are against mandatory training for e-scooters, while many non-users are in favor of this.

The study used an online survey of people who were recruited through Facebook in what is called a "convenience sample". The results can give important indications of attitudes and experiences in the areas in which the respondents live, but are influenced by who had the opportunity to answer at that time, and who chose to do so. The survey was open from June 25, 2020 to July 20, 2020 and 865 people over the age of 18 participated.

Riding on the pavement allowed or not?

This survey was developed in collaboration with researchers in Australia, Belgium, the Czech Republic and Sweden, and was distributed in these countries during the summer and autumn of 2020. Since the regulations for the use of electric scooters on pavements varies from country to country, the TØI-researchers wanted to compare how non-users experience the interaction with e-scooters when they are out walking in the streets.

In Norway, Sweden and Belgium e-scooters are allowed riding on pavements if maintaining an approximate walking speed, with some local varieties in regulation. Of the five countries where the survey was conducted only the Czech Republic forbids the use of e-scooters on the sidewalks but allows the use in pedestrian streets and squares. The results show that the Czech Republic is the only country where people in general find the interaction with e-scooters pleasant, while in the other four countries people find them annoying. With that in mind, a ban on the use of e-scooters will probably be a welcomed regulative measure for pedestrians.

The report is written by Katrine Karlsen and Aslak Fyhri. The project is a research and development project funded by the Norwegian Public Roads Administration, Viken County Municipality and Trondheim Municipality, as well as internal investment funds from the Department of Transport Economics TØI.

You can read an English summary here