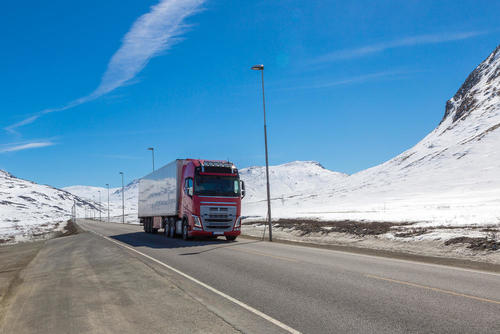 For many years the media has reported on poor safety for foreign freight cars on Norwegian roads compared to Norwegian freight cars. TØI has updated the risk figures on behalf of the Norwegian Public Roads Administration. The development of accidents is very positive.

From the period 2007-2012 to the period 2013-2018 there has been a 50 percent reduction of the risk of traffic accidents with personal injuries for both Norwegian and foreign heavy goods vehicles. But the foreign freight cars still have twice as high a risk as the Norwegian ones.

Accident data for the entire period 2007-2018 show that there are large differences in accident risk depending on where the foreign goods vehicles come from.

Cars from the EU's first member states (EU15 with the exception of Sweden and Denmark: Finland, Great Britain, Ireland, France, Germany, Netherlands, Belgium, Austria, Greece, Italy, Luxembourg, Portugal, Spain) have the highest risk, with 0.66 injuries per million kilometers driven. This is about 2.5 times higher than Norwegian heavy goods vehicles, which have 0.25 injuries per million kilometers driven.

The figures also indicate that the accident risk for foreign cars has decreased and approached the Norwegian numbers in 2016 and 2017. However, the numerical basis for the individual years is small.

Of the total traffic work, Norwegian drivers account for around 90 per cent, and 80 per cent of accidents occur with Norwegian heavy vehicles.