Section control reduces injury crashes and, even more, the number of killed or severely injured. The results refer to the section of road between the two cameras. Institute of Transport Economics in Norway has evaluated 14 sites in Norway. 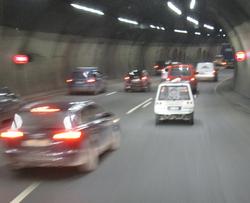 Most sites has an 80 km/t speed limit, two lanes and volumes between average daily traffic of 1800 and 14000 (mean = 6400) in the before period. At eight of the sites there were speed cameras in the before period. Eight of the section control sites are in tunnels. Seven of the tunnel sites are in subsea tunnels. The results indicate that the crash reductions in tunnels are at least of the same magnitude as on open roads. Most tunnel sites have section control in only one direction. These are for the most part steep downhill sections in subsea tunnels. At such sites the number of injury crashes may be reduced by up to 25 per cent and the number of killed or severely injured may be reduced by up to 59 per cent.

The evaluation takes into account the assumed crash effects of the speed cameras. The results refer therefore to the effects of section control at sites without camera enforcement in the before period. The length of the before period is three years at all sites. The length of the after period varies, depending on the date of installation. All after periods start in the third month after installation and end at the latest in the end of 2013. The average length of the after periods is 1.8 years. The evaluation was done by the Institute of Transport Economics in Norway on behalf of the Norwegian Public Roads Administration.

For more inormation about our study, please read  (summary in English)