Increasing the age limit for obtaining a light motorcycle driver’s licence from 16 to 18 years is expected to result in a considerable reduction in crash involvement among 16- and 17-year-old riders of powered two-wheelers and three- or four-wheeled mopeds. For crashes resulting in death or severe injury the reduction is estimated at about 34 per cent. 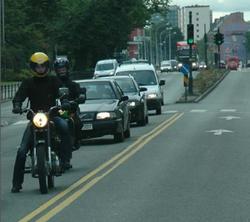 The Norwegian Public Roads Administration are consider increasing the age limit for light motorcycles (category A1) from 16 to 18 years, due to the high crash risk among 16- and 17-year-old riders of such vehicles.

The main purpose of the project presented in this report has been to estimate potential traffic safety effects of these changes.

If the age limit were increased, only about half of those who prefer a light motorcycle, would consider choosing a moped instead. The results are based on an internet survey among around 3500 16- and 17-year-old holders of a moped or light motorcycle licence.

A survey showed that about half of light motorcycle licence holders would consider choosing a moped if the age limit were increased. The preferences are about equally distributed among moped car, 2-wheeled moped, and ATV.

The report is written on behalf of the Norwegian Public Roads Administration.