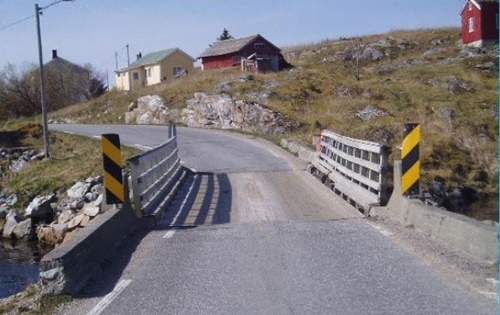 Researchers at TØI have analyzed serious crashes on or near road bridges in Norway during the years 2010-2016.

During these years there were 38 fatal crashes on or close to road bridges. Thirty-one accidents were judged to be related to characteristics of the bridge or of the road close to the bridge. Hitting the bridge guardrail, and sometimes driving through the guardrail, occurred in several crashes.

In addition to the fatal crashes, there were 115 crashes with severe injury and 1280 with minor injury. Out of 7300 bridges over 10 metres long, personal injury crashes had occurred on 869 bridges.

The total risk on bridges – including 50 metres before and after – is, however, somewhat lower than on the remaining road network. This is partly explained by the absence of intersections on and near most bridges. Another possible explanation, which should be investigated, is whether some drivers tend to reduce their speed when approaching a bridge.

The share of crashes involving motorcycles or mopeds was twice as high on or near bridges as on other road sections. Several crashes might have been less severe if guardrails had been improved. Extended guardrails before bridges could have reduced the consequences of driving off the road on the approach to a bridge.

The report is written in Norwegian, but you can read an English summary here: Traffic accidents on Norwegian road bridges 2010-2016. TØI Report 1606/2017. Authors: Fridulv Sagberg, Per Andreas Langeland