Average speed on Norwegian roads with an 80 km/h speed limit has decreased by about 1 km/h during the last 5 years. Probable explanations are increased traffic volume, decreased prevalence of large speeding violations and an increase in the share of older drivers. 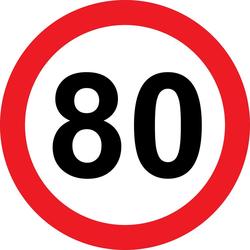 Data from traffic counting stations administered by the Norwegian Public Roads Administration (NPRA) indicate that the speed level has decreased during the last decade. The main purpose of the present project was to estimate the magnitude of the speed decrease and to investigate possible explanations. A specific issue to address was to what extent the increased share of older drivers has contributed to the speed decrease.

Older drivers drive more slowly than younger drivers. Even though the changed age composition of the driver population explains part of the speed decrease, most of the decrease is due to the fact that more cars are driving on Norwegian roads. The change in average speed for the whole period 2008-2014 was estimated to be a decrease of 1.05 km/h, with a 95 % confidence interval from 0.37 to 1.72 km/h. This corresponds to an average year-by-year decrease of 0.175 km/h.

The project comprised three parts. Part A was an analysis of speed data from a sample of NPRA traffic counting stations on roads with 80 km/h speed limit, in order to estimate year-by-year speed changes for the period 2008-2014. Part B was a roadside study where speed measurements were combined with downstream interviews with a random sample of drivers, so that speed data could be matched to driver age and other background information. Based on number plate recognition, speed data were additionally matched to register data about vehicles and owners. Part C consisted of an analysis of two national travel surveys, to estimate changes in the age distribution of the driver population. This was used in combination with data on age-related speed differences found in Part B, to see to what extent the increased share of older drivers could explain the general speed decrease.