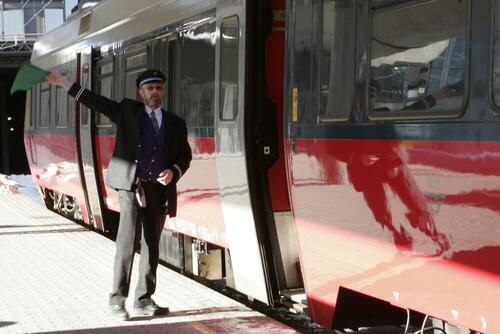 Norwegian railway infrastructure is in an insufficient condition, capacity in Eastern Norway is limited and delays are due to infrastructural conditions.

The railway sector also lacks an actor who takes care of the overall responsibility for the railway, in conjunction with other modes of transport, delivering the services customers demand.

Organization of the railway in Norway

The study reveals capacity challenges at workshop facilities that also create problems for the various maintenance providers. Norwegian railway infrastructure is generally in an insufficient condition, and capacity in central parts of Eastern Norway is limited. Delays appear to be increasingly due to conditions at the infrastructure, and in the interviews in the study, stronger incentives for BaneNor are called for.

The railway sector lacks an actor that ensures overall responsibility for the railway, together with other modes of transport, delivering the services customers demand. When the capacity and quality of the railway infrastructure determines the offer, a vacuum thus arises with regards to who is to take the overall responsibility for the customer perspective in the current organization. The management structure between the Ministry of Transport, the Norwegian Railway Directorate and BaneNor is part of this challenge.

The quality, frequency and volume of the service offer is largely determined by the capacity and quality of the rails, and the problem is bigger today than it was when the competition was first discussed.

The organization of the Norwegian competition results in a situation in which the schedules the operators can operate on are predetermined. The same apply to train sets and the number of train sets, and the operator has no saying in whether the infrastructure on one section should be upgraded. What the operators compete for is thus in reality expected growth in the number of passengers.

With only 4.7 per cent of passenger- and freight journeys, the railway in Norway is thus a system that is primarily relevant in interaction with other modes of transport.

Recently, opening up to competition has provided new ways of approaching growth in the number of passengers, but it is too early to say anything about this as the new operators have established their routes during the pandemic.

The organization of the railway in Europe

The EU is working to create a coherent, open and market-based pan-European transport network. In the railway sector, efforts have been specifically aimed at reducing cross-border inefficiencies, as well as improving interoperability. In total, the EU has adopted four railway packages, the first as early as 1991.

The introduction of railway package four has been solved with different models in different European countries. Sweden, like Norway, has chosen a full division of infrastructure and transport, while Germany and France organize the railway according to a holding model, where one parent company owns infrastructure companies and operating companies as separate subsidiaries. In Switzerland, the railway is organized vertically, i.e. three companies are each responsible for their own line of infrastructure, and the trains operate on this line.

The report finds that if passenger share and passenger growth are to be a measure of successful organizational form, the Swiss model appears to be the most successful. Here, arrangements are being made for better coordination between infrastructure and trains, and there are several units, so that benchmarking is possible to a certain extent. However, applying the Swiss model alone will be too simple an analysis as the railway in most European countries has been underfunded for several decades, and the answer to how to move more passengers from car to rail is probably primarily this underfunding.

All the countries in our study have cross-border traffic, both freight and passenger train traffic. In Norway, this amounts to only 0.5 per cent market share in relation to other modes of transport such as air and car.

The report is based on data from literature reviews and interviews with relevant people from employee and employer organizations, former managers in various companies in the railway sector (before and after the reorganization), and government agencies.