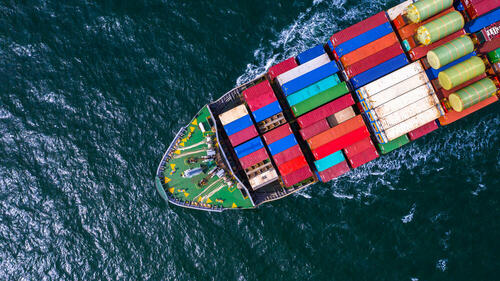 The shutdowns that followed the Corona pandemic in 2020 triggered great uncertainty: A decline in demand for goods and transport was expected, but instead the consumption of goods increased globally. This had major knock-on effects for global supply chains. Despite major challenges for international transport, only minor changes in transport volumes related to Norway's foreign trade are observed during the pandemic, and some goods and modes of transport increased volumes through the pandemic.

How did the pandemic affect Norwegian freight transport? (Text in Norwegian)

Challenges for freight transport during the pandemic

The report points out which challenges the sector faces, and what can be learned from the pandemic.

As a result of the shutdowns in China, and later the USA and Europe, an imbalance arose in overseas container shipping. This resulted in a major lack of shipping capacity and containers, delays and challenges for the ports, but also great uncertainty for the recipient of the goods. Shipping prices exploded, especially for goods from Asia. The blockade of the Suez Canal in March 2021 worsened the situation and accelerated new challenges of transport time, uncertainty, unreliability and record high shipping rates, with long-lasting ripple effects. This led to a number of challenges for further transport from the major European ports to Norway. Nevertheless, container volumes to Norway were maintained during the pandemic.

Increased freight rates primarily affected customers without fixed price agreements, while new fixed price agreements were set with historically high prices, longer lock-in periods and requirements for minimum volumes. The development of freight rates particularly affected the transport buyers, while the freight forwarders, who mediate the freight, were affected to a much lesser extent. The shipping companies made a very good profit, after many years of financial loss or small profits. Towards the autumn of 2022, the situation changed in line with economically tougher times for world trade.

Air freight was particularly affected as a result of passenger planes being grounded, practically overnight. Freight "in the belly" of passenger aircraft usually accounts for well over half of the global air freight. Measures through increased use and conversion of passenger aircraft to cargo aircraft almost covered the loss in "belly capacity" and resulted in greatly reduced cargo capacity throughout the pandemic. Urgent need for large quantities of infection control equipment from China, vaccine transport, and increased demand as a result of the imbalance in the container freight market, put further pressure on air freight. The consequences were, as in the case of overseas container freight, tremendous growth in freight rates, especially for routes from Asia.

Freight rates have remained at a significantly higher level than before the pandemic, with strong price increases as a result of new waves of infection. The high freight rates resulted in large financial loss for all segments of the value chain for air transport, with the exception of airfreight forwarders and freight companies.

Imports by rail increased during the pandemic, but generally accounts for less transport volume. Internationally, the railway route between Asia and Europe grew greatly. The route sometimes provided faster transport and fewer capacity and reliability challenges than for overseas container shipping, but at higher costs. With the war in Ukraine, uncertainty arose about the future prospect for the Asia route and the capacity can come close to replacing container ship capacity.

The growth in freight transport by truck across the Norwegian border continued throughout the pandemic. Shortage of professional drivers became, and still is, a more precarious challenge during the pandemic, especially in the UK and USA, but also in Europe, and is due to, among other things, increased demand, an aging workforce and reduced availability of Ukrainian/Belarusian drivers. With the exception of shorter periods at the start of the pandemic (challenging border crossings in Europe) and around the re-opening of the border with Sweden, road transport managed relatively well. The war in Ukraine has exacerbated cost increases, increased driver shortages, created raw material shortages and led to a number of delivery challenges.

What can the world learn from the pandemic?

• While previously economics was the main decisive factor for transport solutions, the pandemic has led to an increased focus on quality and alternatives in the supply chains.

• Small bottlenecks in logistics systems can have enormous consequences.

• The pandemic has highlighted how supply chains according to the just-in-time principle, with the reduction of buffer stocks, the relocation of central stocks to the EU and increased dependence on deliveries from China, can pose challenges when the transport system is out of balance.

• The formidable cost increases and challenges with delivery time have lifted transport and logistics higher up the agenda for transport buyers.

• The pandemic has focused on the ability to adapt in a very short time, and that it is important to have an organization that is able to cope with unforeseen events and handle changes on an ongoing basis.

• Long-term transport agreements and fixed price contracts have been an important success factor for transport buyers when the transport market was out of balance.

The report is financed by the Research Council of Norway.