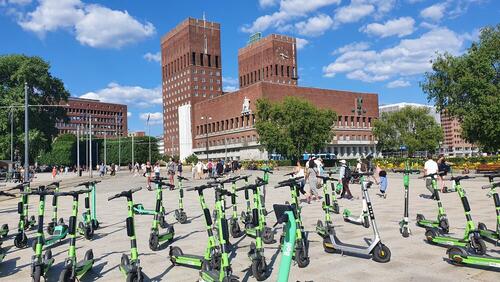 E-scooters, e-bikes and other micromobility offers both potential benefits and pitfalls, according to studies in a special issue of Built Environment on micromobility.

Nils Fearnley at the Institute of Transport Economy in Oslo is the guest editor.

Micromobility is gaining momentum in cities around the world. The benefits of increased, flexible, affordable, fun, space-efficient, and emission-free mobility and access are immediately apparent. Numbers of privately-owned as well as shared electric scooters (e-scooters) have grown from almost zero in 2017 to completely dominate urban scenes across the developed world only a few years later.

Both benefits and pitfalls with micromobility

Chief Research Economist at the Institute of Transport Economy, Nils Fearnley, is the guest editor of a special issue of Built Environment which focuses on micromobility and urban space. The issue investigates how new forms of micromobility (city bikes, e-bikes, e-scooters and skateboards) impact the city, its land-use and transport systems, the occupation of space, users and non-users, and the environment.

According to Nils Fearnley, micromobility offers many potential benefits but also some pitfalls.

- Outcomes depend crucially on how local and national governments find the means to regulate so as to mitigate problematic side-effects and to facilitate the realization of the benefits. Land use and transport are deeply intertwined policy areas. For urban micromobility, this is even more so.

The contributions included in the special issue cover a full continuum from the early accounts of conflicts and controversies caused by the introduction of new forms of personal mobility devices, to more mature micromobility markets where micromobility, given the right set of policy tools and corporate governance practices, offer solutions to many of the dilemmas associated with urban mobility, social inclusion, public space, and climate change – to name a few.

In his editorial Nils Fearnley argues that shared as well as privately-owned micromobility offers promise to help solve a range of policy goals, such as

- As this special issue substantiates, and in line with some of the references cited, the achievement of such potential advantages cannot be taken for granted. Market forces will not, by themselves, necessarily work in desired directions. Various forms of regulation of shared micromobility are essential, Fearnley explains.

A fellow researcher at the Institute of Transport Economics, Tanu Priya Uteng, together with colleague Andre Uteng in Rambøll, is contributing with a paper in which they combine land-use analysis with the potential accessibility gains of e-bikes. With two Norwegian case studies, they show how e-bikes can increase accessibility to jobs, especially in areas that surround city centers. This effect can be amplified with supporting transport and land-use measures, for example cycle lanes, speed limits, and densification and transformation of such areas.

- Analyses reveal that on the introduction of e-bikes in Oslo, accessibility to jobs in the city centre increases from 20,000–24,000 to over 28,000 jobs. For Trondheim, in terms of spatial expansion of accessibility for jobs, there is an extension of the catchment area from 6 km2 to 18 km2, Tanu Priya states.

- Based on our findings, this study strongly recommends integrating the impact of e-bikes with land-use planning processes and decisions. Through active land-use management, municipalities and regional development authorities can take informed decisions to steer urban mobility in a more sustainable direction.

In a study from Ghana Regina Amoako-Sakyi et al. estimate to what degree e-scooters and other micromobility modes can succeed in Ghana’s urban streetscape and transport systems. The odds are not good, according to the study. In another study, Lorne Platt accounts how skateboarders find new uses for, and interactions with, existing urban furniture, spaces, and built environment, often to the annoyance of their fellow residents.

In the UK two case studies of the introduction of docked and dockless bicycle hire Geoffrey Dudley et al. conclude that the rise and fall of these services, initially showing great promise but subsequently unable to deliver either financially or transport-wise, with littering and vandalism as end results in the dockless case, echo the experiences of so many cities worldwide where dockless bikeshare schemes in particular fall between legislative stools and render local authority governance void.

Susan Shaheen et al. review the history of micromobility in the US before taking a forward look at dilemmas and opportunities for the future of shared micromobility, which depend heavily on soundly based regulatory and policy actions. Henna Sundqvist-Andberg et al.’s paper analyses, in combination, the sustainability performance of the urban transport system and the sustainability of Finnish e-scooter service providers’ business models.

According to Nils Fearnley, and like the studies presented in this special issue point out, the future of micromobility is a question of regulation, enforcement and governance.

- Bicycles, skateboards, and e-scooters are undoubtedly here to stay. But new technologies, vehicles, and business models will inevitably emerge and disrupt urban mobility in the future. It is therefore essential that governments at all levels are proactive, flexible, and facilitative in order to achieve wider goals for transport, society and climate. The role of micromobility in a multimodal transport future must be maintained and promoted.